Decarboxylation, AKA Decarbing, is the process of spontaneously converting THCA to THC with heat (approximately 80-120 C).  During decarbing THCA is converted to THC when the carboxylic acid group on THCA is removed liberating a CO2 molecule and leaving THC behind.

Decarbing is important because THCA is not psychoactive, but THC is. Other cannabinoids like CBD and CBG also have acid forms and undergo decarboxylation.

In spinning band distillation, decarbing happens at the same time that terpenes are being removed.  This is a huge time saver because decarbing happens naturally during the heat up period and doesn’t have to be done as a separate process.

As a bonus the spinning band distillation is under vacuum during decarbing so there is no possibility of oxidizing the cannabinoids.

With wiped film, decarbing must be done as a separate process before distillation.  If decarbing happens during distillation, spattering will occur contaminating the oil with raw extract.

Decarbing for wiped film distillation is often done on an open hot plate exposed to the atmosphere(oxygen).  This leads to degradation and the unwanted formation of CBN.

Be careful! Many people will recommend decarbing before distillation to avoid disaster…see short path decarbing gone wrong below. 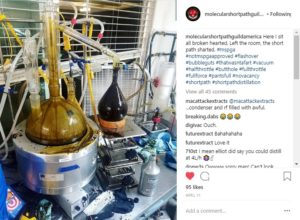 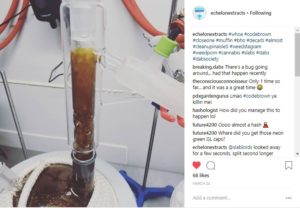 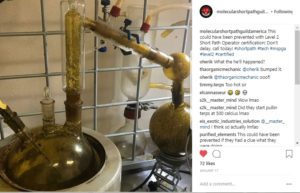 “When any system at equilibrium for a long period of time is subjected to change in concentration, temperature, volume, or pressure, then the system readjusts itself to partly counteract the effect of the applied change and a new equilibrium is established.”

Now what does this really mean? Specifically for decarboxylation, this means that you want a low pressure, some heat, and to remove CO2 as it is formed.

Vacuum is perfect because it lowers pressure and removes CO2 while lowering/eliminating oxygen levels. So not only are you driving the reaction in 2 separate ways, you are also preventing oxidation (which according to Le Chatlier’s would be accelerated at higher temps)!

Oxygen + heat will degrade your product! Be careful if you are decarbing at high temperatures, especially without your THC/CBD crude being under vacuum or an inert atmosphere. 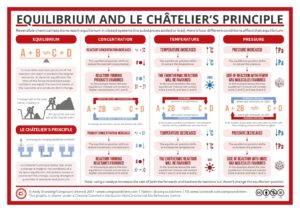 B/R 9200 offers inline degassing and decarboxylation. While collecting the terpene fractions, gentle heat and light vacuum are applied to automatically decarb the material in the boiling flask flask.