Consumption of cannabis has shifted over the years from smoking the plant to the use of concentrated cannabinoid oils.  Vaping, dabbing, and edibles are becoming the most popular ways to use cannabis oil.

These oils which are rich in THC and CBD are made by extracting the cannabinoids with a solvent. Other minor compounds like CBG, CBN, and more are also extracted. The most common solvents are ethanol, butane or CO2. Occasionally, other solvents like propane or a blend of solvents will be used.

Butane is a petroleum product. It is a hydrocarbon that is a gas a room temperature.  When butane is sent through a tube or “column” containing the plant material, many compounds are picked up. From there, a variety of products like shatter and THCA diamonds can be made. Shatter, wax, or any of the other products from butane extraction can also be used to produce distillate.

A down side is that butane extraction is very flammable and can even be explosive. Because of this it must be used in a room equipped and certified to do so.

While butane has the potential to be dangerous, there are still many safe ways to use it that each produce unique and valuable extracts.

Extraction with CO2 requires a more complex and expensive apparatus. CO2 has the advantage of being able to act as both a super and sub-critical fluid, having properties of both a gas and a liquid. This can yield a more complete extraction of the cannabinoids and terpenes.

CO2 also has the advantage of being non-toxic, non-flammable gas.  It is food grade so there are no concerns about contact with the cannabinoids.  It is also considered a great way to extract usable terpenes.

Unfortunately, CO2 extraction is a slow process with low capacity. It also tends to pull more of the waxes and oils from the plant than other extraction methods.  These oils and waxes must be removed by winterization (cold filtering in ethanol typically). This adds an extra step and requires the use of ethanol anyways.

Extraction with cold ethanol is both relatively inexpensive and quick. Extracting with cold ethanol (as cold as you can reasonably get it ) as your solvent minimizes the extraction of waxes and oils since they are not very soluble in ethanol at this temperature.  In-line winterization is typically done to further minimize the need for a separate process. Before distillation or other processing, the ethanol is recovered. Recovered ethanol is mostly contaminated with water and to a less degree some other compounds. This ethanol can then be recycled for reuse.

A drawback of ethanol extraction is that it tends to produce darker extracts because it picks up more pigments (coloration) from the plant.

Depending on the method of extraction, winterization may or may not be needed.

Some labs decarboxylate, “scrub”, or perform other procedures before distillation.

With spinning band, there is no need to decarb separately. Decarbing is done automatically and under vacuum during the beginning of distillation. This is possible with spinning band unlike other methods of distillation where it can be risky or impossible. And trust us, you do not want to decarb with high heat in the presence of oxygen! See for yourself how in this case, a large amount of CBD can be lost. 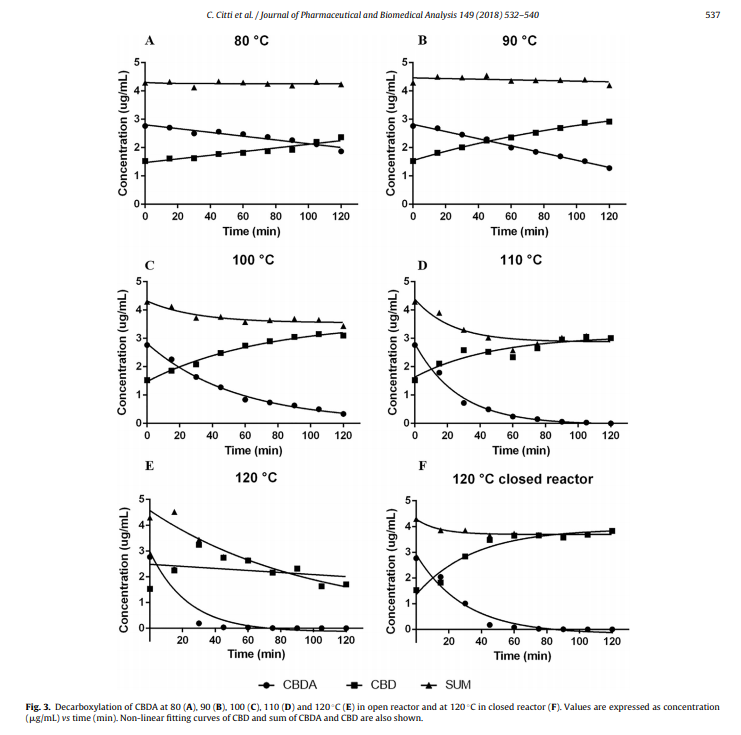 Distillation is used as the final step in processing because it refines the oil concentrated cannabinoids by removing volatile components, terpenes and other residual non-cannabinoids.  Distillates can then be used in a variety of products, but especially vape cartridges and edibles. Some distillate is used in the production of CBD isolate.