Reflux is the return of condensed distillation vapor to the boiling flask. 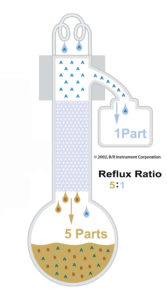 D2892 calls for a 5:1 reflux ratio.  5 parts of the condensate are returned to the boiling flask while 1 part is collected in the receiver.